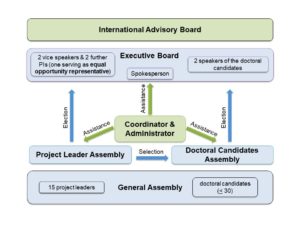 Organizational Structure of the RTG 2740

The General Assembly consists of all principal investigators (PIs) and training members of the RTG and convenes once per year during the annual retreat.

The Project Leader Assembly consists of all PIs and will meet at least twice per year. It will elect the spokesperson, the two vice-speakers and three further PIs as members of the Executive Board and decide on the appointment of the advisory board members.

The Doctoral Candidates Assembly will continuously and significantly contribute to the scientific shape, development and visibility of the RTG.

The Executive Board consists of the spokesperson, two vice-speakers for research area A and B and two further PIs (all elected by the project leaders for the entire funding period) and of two graduate speakers (elected by the doctoral candidates for the duration of 1 year).

The International Advisory Board will consist of 4 internationally well-known scientists, who are experts in research areas that are relevant to the RTG and have significant own experience in running research consortia.