Infections caused by the environmental saprobe Aspergillus fumigatus pose a significant threat to immunocompromised individuals. Conidia of this fungus serve as infectious propagules that are inhaled to reach the alveoli, where they are commonly eliminated via phagocytosis by resident and recruited cells of innate immunity. In an immunosuppressed host, however, germination and tissue invasion of fungal hyphae may occur to eventually result in hematogenous dissemination. Among the conditions that influence the pathogen-host encounter, the availability of nutrients as well as feeding by osmotrophy have to be regarded as strict prerequisites for pathogen proliferation but also for the cellular response of the host immune system. Future research in the RTG 2740 framework is focussed on the physiological interplay between fungal and host immune cells, based on the hypothesis that the nutritional status of either partner translates into aspects of pathogen recognition and elimination, therefore shaping the outcome of the pathogen/host encounter.

In essence, this tandem project aims at investigating to which extent infections with A. fumigatus result from fungal metabolites as well as from an altered metabolism and impaired antifungal activity of host myeloid cells. 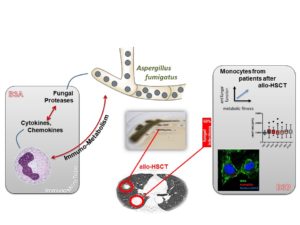